* The program will be ready to receive Incentive applications on September 2, 2019 (barring any unforeseen circumstances). The first closing will take effect on November 1, 2019

How it all works…

Learn About the Program

Choose Your Incentive and Apply

There was a continued decline in mortgage originations in the second quarter of 2019.

Originations fell 8.9% year-over-year with younger Canadians (18-25 years) showing a 13.4% drop according to the Q2 2019 Industry Insights Report from TransUnion Canada.

Although the report acknowledges the multi-factor impacts on mortgage originations including home prices, interest rates, consumer sentiment, and unemployment levels; it says that the regulatory changes introduced in 2018 have had a material effect on originations.

“The new mortgage regulations seem to be having the intended effect in cooling the overheated housing market and broadly preventing consumers from overextending themselves with mortgage debt. This is now the fourth consecutive quarter we have seen a decline in both mortgage originations and balances,” commented Matt Fabian, director of financial services research and consulting for TransUnion Canada.

He added that there are signs of some potentially unintended consequences.

“We have started to see an uptick in co-borrowing as the means of getting a foothold on the property ladder, where multiple consumers make an application together – in effect combining the power of their salaries. Although this is nothing new, it is now often with the help of a parent, other relative or a friend rather than just a partner or a spouse,” said Fabian.

Other debts are rising

While mortgage originations were lower, the report shows that Canadians continued to load up on other debts.

The average non-revolving balance per consumer grew 6.2% year-over-year to $31.4K in Q2 2019. This figure was primarily made up of installment and auto loans but excludes mortgages.

The increases in overall borrowing have been driven by lower interest rates and low unemployment; and consumers have been managing their debts well so far with delinquency rates stable over the past year.

However, as the economy slows and risks of an economic downturn remain prevalent, it will be important for consumers to manage these higher debt levels diligently to remain current on their obligations,” warned Fabian.

Line of credit originations were the strongest in Q2, up 13.9% year-over-year.

The largest cohort in terms of total debt balances in the second quarter was Gen X with a combined $767.4 billion, an increase of 3.4% year-over-year.

“At a headline level, the consumer credit market continues to grow. However, growth hasn’t been uniform, and in major categories like mortgages, we continued to see a decline in origination volumes when compared to the same period a year ago,” continued Fabian. “The shift in focus toward non-revolving credit products is something we’ve seen over recent quarters. The rise of Millennials, who have equaled and slightly surpassed Baby Boomers when looking at outstanding balances, is having a fundamental impact on the approach lenders take to how they market to and service their customers.”

A global ranking of luxury housing markets has highlighted the divergence of Canada’s two largest markets.

The Prime Global Cities Index tracks the movement in prime residential prices of the 46 cities.

Vancouver sits at the bottom with a 13.6% decrease in prices over 12 months and a decrease of 2.4% over the past 3 months.

The latest assessment of the market from the British Columbia Real Estate Association reveals 7,930 home sales through the MLS system in July.

“BC home sales climbed higher for the first time in 18 months on a year-over-year basis in July,” said BCREA Chief Economist Cameron Muir. Housing demand has also trended higher since March, rising 21 per cent on a seasonally adjusted basis. “Households appear to be adjusting to the tighter credit environment as the shock of the B20 stress test dissipates.” 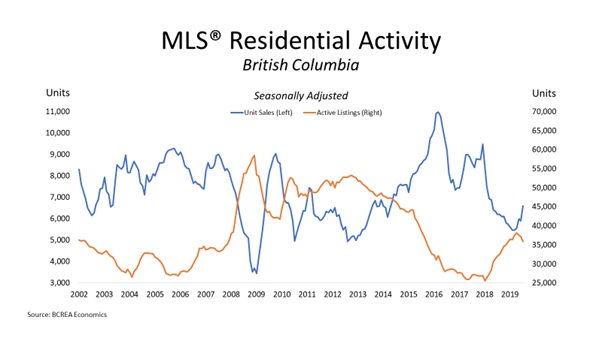 While new listings in July fell 3% from the previous month on a seasonally adjusted basis, inventory was 12.4% above that of a year earlier with 41,621 units available for sale.

Sales-to-active listings ratio at 19.1%, similar to a year earlier.

The recent slowdown in Canada’s hottest housing markets is turning a corner and a potential new price boom is threatening to frustrate would-be buyers’ hopes.

The real risk to Canada’s housing market today is not a crash, but a return to nosebleed levels of price growth thanks in part to falling interest rates, said Doug Porter, chief economist at Bank of Montreal.

Policymakers will have to “be ready to wield some tough measures” if they want to prevent housing costs from becoming even more unaffordable, Porter told HuffPost Canada ― though he said he would “leave it to policymakers” to decide what those should be.

The latest data from the Toronto and Vancouver real estate boards shows the markets shaking off foreign buyers’ taxes and the mortgage stress test. Home sales jumped 24 per cent in both cities in July, compared to a year earlier.

Much of that has to do with more affordable mortgages. The collapse in interest rates on government debt around the world in recent months has pushed down the rates Canadian lenders can offer.

According to comparison site Ratehub, mortgage rates in Canada recently hit their lowest levels since July, 2017, and are near all-time record lows. The lowest fixed rate available at the site is currently 2.39 per cent, a drop of 0.8 percentage points since the start of this year.

The Bank of Canada’s posted rate, which is used in the mortgage stress test, has also come down, to 5.19 per cent, from 5.39 per cent.

This “simply pounds home the point that rates will remain low for long — or forever,” Porter wrote in a client note.

He worries that a return to house price growth will convince speculators and foreign buyers to jump back into the market.

“Domestic policymakers may need to consider other ways to control speculation — especially from abroad — in a world where interest rates stay below inflation, or even below zero,” he wrote.

‘No limit’ to house prices

But with housing affordability near its worst levels on record, how much room do house prices really have to run?

“When you’re looking at a market that becomes driven by wealth, and wealth from outside the city limits, then there isn’t necessarily a limit to house prices,” Porter said.

“You don’t have to look hard to find places around the world where prices have divorced from fundamentals,” he added, citing Hong Kong, the world’s least affordable housing market.

“I don’t think its too early to start planning for the housing market to start getting too hot for comfort again.”