The last three months of 2018 finally brought some improvement to housing affordability across Canada.

After more than three years of declining affordability, RBC Economics says its measure shows widespread improvement; although first-time buyers in the hottest markets are still facing a significant struggle.

In its Housing Trends and Economic Report, RBC’s aggregate housing affordability measure reduced by 0.7 percentage points to 51.9% last quarter (measured as a share of household income).

But in the three most expensive markets there is still a crisis with Toronto, Vancouver, and Victoria showing little improvement in affordability for most buyers.

Vancouver’s affordability crisis endures despite being in “full-blown correction mode. RBC says that even with the slump in sales, high prices means homeownership still requires an eyewatering 84.7% of household income.

Cooling market conditions in Toronto has taken a bite out of sales but RBC expects prices to be flat over the next two years; that won’t help the well-above-average affordability measure of 66.1%.

Montreal’s housing market is heating up but prices are rising at a steady pace.

The area’s affordability measure is some way below the two hottest markets and below the national average, but at 44.5% it is near a decade high.

Condos no longer the affordable alternative
The traditional option of a condo as a cheaper alternative to a single-family detached home is less attractive in the hottest cities.

RBC says that demand for condos has driven prices higher and their affordability measure has increased (become less affordable) by far more than single-family homes (2.9% vs. 0.9%) over the past year.

Buyers of an average condo in Vancouver, Toronto, Victoria, and Montreal pay a premium of more than $900 per month relative to renting a two-bedroom apartment, a figure that has ballooned in the past three years.

Buying a condo is a bigger step up from renting than it’s ever been in these cities.

“We have lowered our profile for future interest rates in light of disappointing economic developments since the late stages of 2018,” said Craig Wright, Senior Vice-President and Chief Economist, RBC. “Furthermore, we also see very little scope for home prices to increase nationally this year.”

The current decline in the bonds market is good news for Canadian fixed-rate mortgage borrowers with rates heading lower.

As the bond market yields invert – as they did Monday in Canada – the cost to banks of borrowing in the market declines, meaning they are able to finance mortgages at a lower rate and pass savings on to customers.

It’s not all good news though because the inverted yield, also seen in US bonds, is often a foreteller of weakening economic conditions and potentially recession.

However, this risk is likely to mean that the BoC will remain highly cautious of increasing interest rates.

An outlook from TD Economics’ Beata Caranci and James Orlando suggests that Canada may need “the real interest rate to remain close to or below zero for a long period” with the deleveraging process only just starting.

There is a growing cohort of investors and analysts that believe the BoC’s next move on rates will be a cut and that is proving good news for variable rate mortgage borrowers too.

Janine White, vice-president of Ratesupermarket.ca told CBC News that rates will climb in the next couple of years but “for the rest of 2019 the prediction is that the variable rate is going to be stable and maybe has a chance of coming down.”

However, all have also reiterated their concern that the mortgage stress test provisions of the OSFI B-20 rules continue to weaken the ability of Canadians to buy homes.

“Millennials are passionate about owning their own home, but many are worried they will never be able to because of higher home prices and tougher mortgage qualifying rules,” said Barb Sukkau, CREA’s President. “Realtors have been advocating for the modernization of the HBP and are pleased to see it addressed in Budget 2019. The measures announced today will help today’s millennials in a tangible way, while also addressing some longer-term concerns related to housing supply and sustainability.”

“British Columbians who aspire to home ownership need to be able to achieve this goal to assure a sustainable future for our province,” says Darlene Hyde, BCREA CEO. “Realtors have advocated for modernization of the HBP for a long time and we’re pleased to see it addressed in Budget 2019.”

Changes are needed
BCREA advocates a review of the mortgage stress tests in light of interest rate rises and is also calling for the reintroduction of CMHC-backed 30-year mortgages.

These views are shared by TREB CEO John DiMichele who says the restrictions on 30-year insured loans and stress tests are not warranted in current market conditions.

“This is especially true at a time when first-time buyers are facing serious challenges in achieving the dream of home ownership. We applaud the federal government for acknowledging that housing issues are a top priority for Canadians, but current mortgage restrictions still need to be addressed,” he said.

CREA says that it is encouraged that the federal government is carefully monitoring the effects of B-20 mortgage regulations with a view to limiting negative impacts on housing markets that are in balance or struggling, and on economic growth in Canada.

Canada’s housing market likely to remain subdued this year but should see an uptick in 2020 as the impact of policy changes begin to ease.

Sales are expected to remain weak amid lower access to mortgages caused by rising interest rates and stress tests. However, prices will rise in 2019 following a stabilization in 2018.

Following data that revealed a sharp month-over-month drop in sales (down 9.1% in February) the Canadian Real Estate Association has updated and extended its resale market forecast for 2019 with sales expected to ease to 1.6%.

British Columbia is forecast to see the largest decrease along with Alberta while Quebec will gain along with a small rise for Ontario.

“For aspiring homebuyers being kept on the sidelines by the mortgage stress-test, it’s a bitter pill to swallow when policy makers say the policy is working as intended,” said CREA president Barb Sukkau. 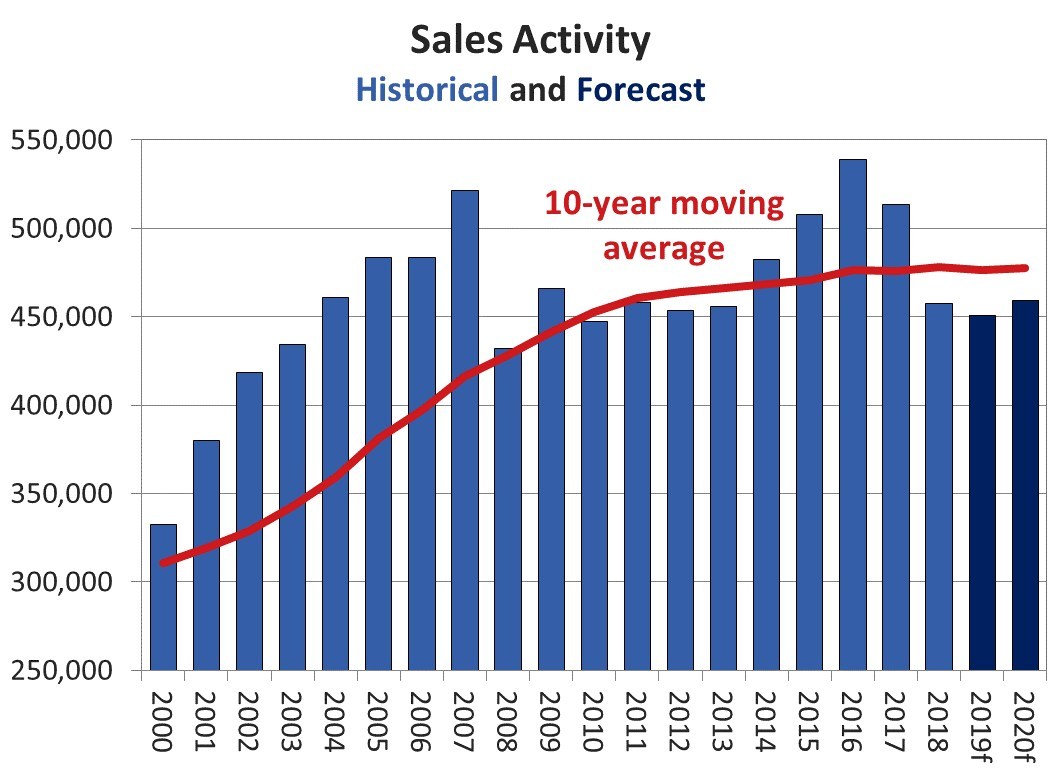 Prices to rise
Prices in 2018 saw a 0.2% decline nationally following the previous year’s 4.1% drop, the largest in 25 years; and the Aggregate Composite MLS® Home Price Index (MLS® HPI) was little changed (-0.1%) y-o-y in February 2019. That said, it still marked the first decline in almost a decade.

But there is an increase of 0.8% forecast for this year, taking the average price to $490,800 and reflecting further average price gains in Ontario, improving sales activity in British Columbia and Alberta (despite further price declines), and the combination of both higher sales and average prices in Quebec.

“The housing sector is on track to further reduce waning Canadian economic growth,” said Gregory Klump, CREA’s Chief Economist. “Only time will tell whether successive changes to mortgage regulations went too far, since the impact of policy decisions becomes apparent only well after the fact. Hopefully policy makers are thinking about how to fine tune regulations to better keep housing affordability within reach while keeping lending risks in check.”

February’s data from the Real Estate Board of Greater Vancouver shows a 32.8% drop in sales year-over-year to 1,484, more than 42% below the 10-year average for the month. Sales were up 34.5% compared to January.

“For much of the past four years, we’ve been in a sellers’ market. Conditions have shifted over the last 12 months to favour buyers, particularly in the detached home market,” Phil Moore, REBGV president said. “This means that home buyers face less competition today, have more selection to choose from and more time to make their decisions.”

Prices eased
Home prices in Metro Vancouver were down in February with the benchmark MLS price at $1,016,600, down 6.1% year-over-year and down 0.3% from January.

“Homes priced well for today’s market are attracting interest, however, buyers are choosing to take a wait-and-see approach for the time being,” Moore said. “Realtors continue to experience more traffic at open houses. We’ll see if this trend leads to increased sales activity during the spring market.”