A new report from CMHC looks at the state of the Canadian mortgage market and highlights some of the challenges that it faces.

It also reveals that the share of uninsured mortgages increased.

Last year saw the slowest year-over-year growth rate of outstanding mortgages in more than 25 years with new mortgages for the purchase of property down 19%, while refinanced mortgages by the same lender decreased by 12%, compared to 2017.

Insured mortgage originations accounted for less than 1 in 3 new mortgage loans in 2018 and, over time, the share of outstanding insured mortgages has decreased by about 16 percentage points from 57% in the first quarter of 2015 to 41% in the same period in 2019.

This increase in uninsured mortgages is the result of adjustments to regulatory changes, of changes in economic conditions and of changes to portfolio insurance, CMHC’s report says.

Mortgage Investment Corporations (MICs) held an estimated $13-14 billion of mortgages outstanding with their share of mortgage originations more than double their share of the stock, partly due to their increasing market share in the uninsured space.

Fixed-rate 5-year mortgages continued to be the preference of Canadian homebuyers and owners, but variable-rate loans have become more popular with the average share of new mortgages with a variable rate at 29% in the first quarter of 2019, a 12-percentage point increase from the same period in 2017. 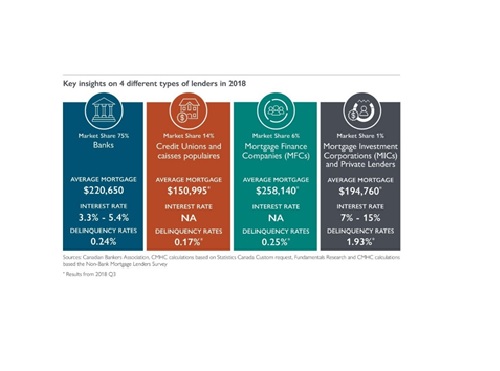 Michel Tremblay, Senior Vice-President, Policy and Innovation, Canada Mortgage and Housing Corporation, said that efforts are continuing to fill data gaps across the Canadian housing spectrum as they are identified.

Demand for offices in Toronto and Vancouver has squeezed the vacancy rates of both, making them the joint tightest markets in North America.

CBRE Canada says that Vancouver’s office vacancy rate dropped to 2.6% in the second quarter of 2019, from 4.7% only a year ago. Meanwhile, the vacancy rate in Toronto held steady at 2.6% thanks to a downtown construction boom.

“Two years ago, it would have been unprecedented to have a Canadian city top the North American office rankings. We now have two Canadian cities setting the pace, which is truly remarkable,” noted CBRE Canada Vice Chairman Paul Morassutti. “Something special is happening in this country and the investments being made by businesses and developers suggest that our office and industrial markets are well-positioned for the digital economy.”

For office building owners, the tight vacancy rate is good news, with record-high average rental rates for Class A offices in Toronto’s financial district – reaching $40 per square foot for the first time ever. For Vancouver, the average rate increased to $44 psf from $42.02 psf in the previous quarter.

CBRE’s Q2 Quarterly Statistics Report shows that Ottawa’s office vacancy dropped to 7.0% in Q2, down from 9.9% in the same quarter last year, due to increased demand and limited new supply.

Calgary’s downtown office vacancy rate continued its slow decline to 26.1% in Q2, down from all-time high of 27.8% a year ago.

For the industrial sector, Toronto and Vancouver may not have the tightest vacancy rates in North America but they are in the pack.

In Montreal, availability of industrial product sits at half of what it was two years ago, dropping to 3.2% in Q2 while in the Waterloo Region five consecutive quarters of positive absorption means an all-time-low industrial availability rate of 1.6% in Q2, rivalling Toronto.

“Across the country the demand for industrial properties, from tenants and owners alike, has seemingly never been stronger,” Morassutti said. “Third-party logistics, food and beverage and retail companies are snapping up space as the momentum of online retail sales continues to build.”

The Bank of Canada is unlikely to make any changes to interest rates when it meets in a week’s time and that is the right move according to a panel of economists.

Twelve of the 14 economists thought a hold at 1.75% would be the correct strategy while 2 believe there should be a rate cut.

However, when rates do change, there is a majority in favour of Governor Poloz and his team deciding to cut interest rates rather than raise them, whenever that move happens to be.

The panel was convened by comparison site Finder.com with 93% forecasting a rate hold on July 10 and 86% agreeing that is the right thing to do.

But Stephen Brown, senior economist at capital Markets, would like to see a cut next week, although he concedes that is not likely.

“Core inflation is a lagging indicator so the recent rise doesn’t tell us about current conditions. Much of the rebound in GDP growth in Q2 reflects the reversal of temporary factors that weighed on growth in Q1. The business surveys paint a gloomy picture and we think that Bank would do well to follow the Fed’s playbook by enacting some insurance cuts,” he said.

Most of the panelists think there will be a cut but not yet.

“It is best to hold onto that option until there are clear signs of a recession. The Fed in the US has indicated that they may begin cutting their key target rate later this year. The Bank of Canada should watch their decision closely,” said Moshe Lander, economics professor at Concordia University.

Finder’s survey also asked economists about the unintended consequences of the mortgage stress test with 70% believing the test has contributed to rising rent prices and 40% believe the stress test has significantly disadvantaged first home buyers.

“While the stress test aims to protect consumers, by ensuring they can afford their mortgage payments when rates eventually do rise, some economists think it could disadvantage first-time home buyers who no longer qualify for a mortgage and must try and save up for a bigger deposit, while still paying rent,” said Angus Kidman, global editor-in-chief at Finder.

Darin Germyn, President of the Board, commented, “The Fraser Valley market is still adjusting to the federal government’s new mortgage requirements and to the provincial government’s speculation and vacancy taxes. We’re seeing historically low levels for home purchases in our region, and at the same time, we’re seeing some prospective sellers holding back on listing their homes; waiting to see what the market will do.

“This has created a great opportunity for buyers in the Fraser Valley. Inventory overall is growing; prices of benchmark, or typical homes, have decreased 6 to 10 per cent over the past year and interest rates are still holding firm.”

“There is tremendous variation in the market depending on the property type and location”, added Germyn. “It’s currently a buyers’ market for detached homes in South Surrey/White Rock; but is leaning towards a sellers’ market for townhomes in Langley, so if you’re considering taking advantage of the market slowdown, first, talk to your REALTOR®.”

Home sales remain weaker than usual in the Metro Vancouver with June posting its lowest total since 2000.

“We’re continuing to see an expectation gap between home buyers and sellers in Metro Vancouver. Sellers are often trying to get yesterday’s values for their homes while buyers are taking a cautious, wait-and-see approach,” said Ashley Smith, REBGV president.

“Home buyers haven’t had this much selection to choose from in five years,” Smith said

The slow sales environment in the region continues to put downward pressure on prices.

The MLS® Home Price Index composite benchmark price for all residential properties in Metro Vancouver is currently $998,700, the first time in 2 years that this has been below $1 million.